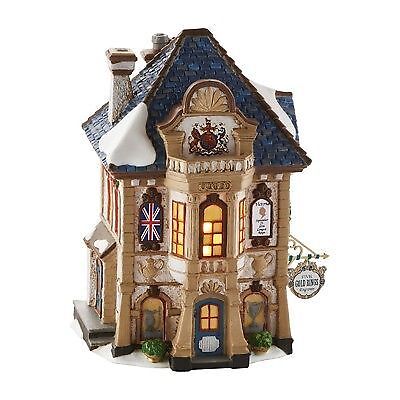 Department 56 began making Christmas villages in the 1970s with the Original Snow Village as the flagship set. The Dickens village, released a few years later, is based on "A Christmas Carol" by Charles Dickens as well as other Dickens books. Collecting new items for your Christmas village, including a town church, houses, and Dickens characters, is a fun hobby that can be added to every holiday season.

What categories are available on eBay?

When choosing your Department 56 collectibles on eBay, the following categories can help make your decision easier:

What are the basics of the Department 56 Dickens Village?

If you are just starting to collect the lighted Department 56 Dickens Village, begin with a few basic and affordable pieces available on eBay. The starter set from Department 56 includes the Sudbury Church, Old East Rectory, and the Spirit of Giving, which includes three figures bearing gifts. This Dickens set also includes several trees, some faux snow, and a cobblestone village street. You may want to acquire the following Department 56 Village pieces, too:

What are some collectible Department 56 Village figures?

How do you display these Department 56 Collectibles?

Department 56 Original Snow Village and Dickens Village sets, single items, and accessories are fragile and have tiny parts that could get lost. If you choose to display your older Department 56 figures, consider putting them in a glass display case. If your Department 56 collection is mainly for Christmas decorating, arrange your village in a sheltered place, and see how it looks when lit. Sprinkle the area around the houses, church, and Dickens accessories in the village with artificial snow. Be creative with some other easy Department 56 display ideas, such as the following:

Content provided for informational purposes only. eBay is not affiliated with or endorsed by Department 56.